After the crash at Timberman 70.3 I knew the best thing to do was try to rest, lower the intensity of my workouts and not race for two or three weekends. Honestly it killed me. I was the cheering section at an Olympic Tri in Old Orchard Beach and a Swim race in Lowell. I absolutely hated to miss the swim race! My times have been coming down and I so wanted to swim (wait, did I really just say that?!) but my ribs weren't 100% and I wanted them to heal (or heal more). But, I was lucky enough to get entry to the Cape Cod Hero Olympic Triathlon out in Mashpee and I didn't want to miss it. Not only because I was able to get in but because I LOVE Streamline Events' races. The race director is a great guy and his races have the best staff and support. So with 3 weeks rest, I headed out the Mashpee to race. 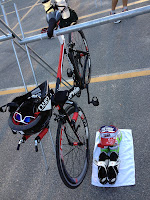 The race venue was kind of off the beaten path and included a 2 mile bike ride to the transition area/start with all your gear from a parking lot...a little bit of a pain but the ride was worth it...the race area was gorgeous. Now I had picked up my race packet the day prior only to realize that I was #6. To those of you that don't know, those numbers don't just go to who registers first. Those are seeded numbers. Usually the first 20 or so numbers at any given local triathlon go to Elites (one step under pro's) or teams or local "VIP" athletes (none of which by the way way are me). So when I got my numbers I felt a little pressure. That was reinforced when I got to transition and was in the first rack with the Elites and two Para-athletes. Okay...just gonna be a normal race...gulp. Imagine my surprise as I walk out of transition and run into Bill, the race director, who stops what he's doing to ask me how my recovery has been going and thanks me for coming to his race! I was blown away. Its so obvious that he loves his races and sincerely appreciates the folks that come out to do them! Just one more reason I support and race his events. A quick double check of my layout and I was done.

ready for the swim start. The water was...brisk. Phew, welcome to Fall temps in MA (note to self, start racing down south after August...brrr)! We waded into the water for the start...a few "don't drown" thoughts to myself and the gun goes off. There was a bit of a current going out so I knew I needed to the turn and get it to my back ASAP. I kept focusing on form (that damned dropped arm/shoulder when breathing is my nemesis) and being fast. I was trying my damnedest to get into a smooth rhythm but I was breathing every other stroke. Ok, well I guess I'm pushing harder than I thought so just keep this up and keep moving. I hit the final turn buoy headed home, thinking I'm having a great swim when as I look left I see my swimmer friend Kim blow by me...ok, try top hop on her feet...no luck. Then I look right to see J blow by me! NO way I'm getting on her feet! Both women started a wave or two behind me by the way...ugh. Damnit! Ok, ok...just focus on my race and get to the finish, nothing I can do about it now. I dig in and push to the shore, get out of the water, glance down to see what I think is a pretty good time (for me anyway) and then focus on getting to the bike.

The bike course went out to a double loop on the quiet, clear of cars, well maintained roads of Otis Air Force Base. That means a fast course and one that went right by the aircraft parking area which set up for some great pictures! As I peddled I started thinking "...there's no need to push it, I'm only a few weeks out from a bad crash, its not like I'm gonna I win this thing anyway. I didn't even feel like racing this last night. I should just relax". Ya, that's the BS you tell yourself when you're gonna quit. I felt good, had a decent swim and was wearing #6 after all...so screw that and lets start chasing folks down! I looked down to see my speed was holding at 24mph. Good, I can work with this...keep this speed, get to the next person, pass...repeat. I had no idea where I was in the overall but I kept looking for people in my age group to ride by and kept pushing. I caught both Kim and a few minutes later J, was feeling pretty good and just hammered as hard as I could the rest of the way. I didn't know why but my stomach was killing me. I couldn't tell if it was becuase I swallowed too much air (or water) during the swim or if I was bloated or had to pee or what but I was uncomfortable. All I could think was get to back to transition as fast as I could so I could hit a portapotty and figure out was going on.

I rode into transition with people really excited and cheering my arrival. Huh? That NEVER happens. People kept yelling that I was doing great and that I was not that far behind the leaders. For real? I glanced around transition as I went to rack my bike and saw there were only a few bikes were racked. Holy crap! Maybe I am having a good race! Ok, rack my bike and get out of transition as fast as I can. Of course, NOW I would have trouble racking my bike! Ugh. After 3 tries I got it situated, got on run shoes, grabbed my number, visor and headed out of transition. Just as I crossed the timing mat to hear the beep I put my visor on...only to realize I couldn't strap it on, over...my HELMET! DOH! In my haste to get out of transition, I forgot to take off my helmet. So here I am looking like an idiot, trying to hand my helmet off to a volunteer yelling at me to "just throw it" with a #6's all over me. I was angry, and even worse, embarrassed. Talk about a rookie move. In all my years of racing I've never left my helmet on. Hell, I've been the guy in transition yelling "take off your helmet" to other folks for years! I quickly got my helmet off and took off like a shot for the run.There were a few people in front of me and I tried to run them down quickly and get settled into a good pace. That was easier said than done. The next 6 miles were spent with me debating in my head about whether I should run into the woods quickly (remember I was gonna use that portapotty in transition off the bike?) or keep pushing. But I kept catching people...and felt like I could catch more people...and I didn't want to lose the time from running in the woods (yes, these are indeed the thoughts that go through a triathlete's head). So I made the decision to just bear down and get to the finish as fast as possible or blow up on the course. 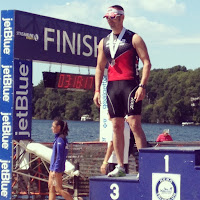 The run course was rolling and again all I focused on was picking someone to catch, passing them and then picking someone else. I even ran down and passed people running on a relay team...and I LOVE passing relay people since they come into their "leg" fresh because they're only doing one event. Its always so deflating to think your pushing hard to then have someone blow by you like you're standing still on the bike or run. Those "catches" just kept adding fuel to the fire and with 2 miles left I turned myself inside out to catch anyone left out on the course and get to the finish. I ran negative splits with the last mile on a 7:01 pace. Not too bad. As I crossed the finish line, about to throw up from exertion, I felt great. I didn't listen to the little voices telling me to lay off and other then the helmet issue I put together a pretty darn good race. I was 59th overall/13th in my age group out of the water, 17th overall/4th overall on the bike and 15th overall/1st in my age group on the run. Like I said, the course was hilly and I guess it hit a lot of other racers too. That all resulted in 17th overall and 3rd in my age group on the day. I'm happy with the numbers and even happier with the result and like I said, I felt like a put together a pretty good race. Now one more triathlon left in the season and then the focus shifts to the fall/winter road race training/racing plans...
Posted by Dutch at 9:28 PM