(I've been meaning to post this race recap from the race on the 27th of July...and it was stuck in my "drafts" lists for a while. Ugh, well here it is) As I’ve said before I was lucky enough to be selected as an ambassador for TopoAthletic shoes. Well, I got their kit in the mail on a Saturday and figured I just had to go find a race to wear it in..right?!

A quick glance of coolrunning.com showed that there was the 51st Annual Fred Warren 5.5 Mile Road Race right by my house Sunday night. A race…by my house…in the evening…and a never-before-run-distance…perfect!

So getting there an hour early (duh) for the 6:30pm start found a pretty large group of people to run. Most of which were talking about how hilly the course was. Ya, I mean I know there are hills out here so I didn’t think anything of it…big mistake.

As the race started I figured the best thing was to try and settle into a 7min pace for the first few miles to see how the race shook out. Hitting the one mile mark on 6:42, I heard the high school track kids running the race telling each other the pace was too fast and they needed to slow down for the “rest of the race”…uh oh…do they know something I don’t?! Well, nothing to do but keep going. And then the hills came…ooph. Mile 2 was on 7:33 and I figured out that the course would just be a series of short, steep hills to get over and try to gain speed on the backside…and then mile 3 came. The course turned cross country as we climbed to the 3 mile mark (on a 7:50), so I figured the guy yelling time splits was at the “top” of the hill as we were running up to him. Sweet baby Jesus was I wrong. As we climbed to the 3 mile mark…to turn right…to a MONSTER hill…that you couldn’t see the top of. This is a hilly course? Indeed! The hill was just as mentally crushing as it was physically. Some of the people that were in front of me at this point, were walking up the hill. Walking! Son of a monkey hammer that hill hurt to get over. How much? I turned in an 8:52 for mile 4! Mile 5 was just spent trying to catch my breath and get back into a decent rhythm and all I could manage was a 7:42. That last half mile was just gutting it out to the finish. I ended up with a finish time of 41:15 which landed me 34th overall and 7th in my AG. Not a great time but a new distance on a very hilly course in new schnazzy kit. I’ll take it. Now I need to get on the foam core roller and a nap!

The Lowell Mill City Triathlon...sometimes familiarity is just what you need.

I have to admit that between the debacle at the Patriot 70.3 and all the medical issues afterward I was more that a little gun shy about racing again anytime soon. I have been bouncing between having great training sessions, having terrible training sessions, taking too long to recover and general stress and worry about what the heck is going on with me as of late. The last thing I wanted to do was race. With everything going on the last thing I needed was to have a bad race and just compound all the bad crap that's been happening lately. On the other hand, maybe the best thing I could do for myself was to race again and get back in my normal routine of racing every weekend. Luckily the Mill City Triathlon was coming up and I know the race, the locale and the course pretty well. What better way to get back to racing? Since I've raced the event the last four years, I know exactly how far away it is, where to park, what transition setup looks like and how the race runs so there wasn't the normal pre-race jitters of having to get there super early in order to be "prepared for anything" like I normally do. 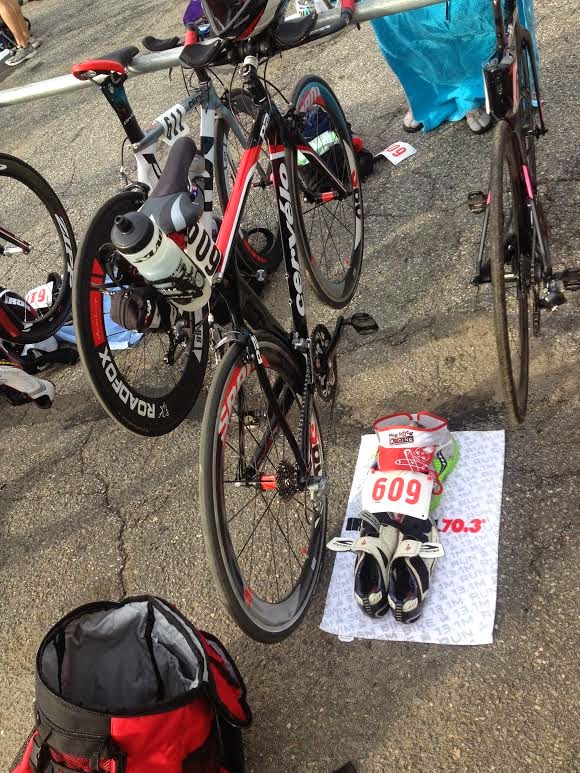 Parking and set up of transition was easy and it was into my wetsuit to take an easy swim in the water. Now I was stressing about the swim. Yes, its short but the swim at Patriot killed me and I was more than agitated about getting back into race water. I've had all sorts of crazy stuff happen on this course over the years so I just wanted to focus on good swim form, get to the turn buoy and get out of the water safely and not hating everyone on the planet.

It was nice to get in the water with a bunch of swimmers to race. I don't know what's up with this 3 people enter the water rolling swim start thing races seem to be doing lately but it was just nice to be in the water surrounded by swimmers. I seeded myself in the front third of the pack. When the gun went off I knew that all I needed to do was sight the turn buoy, swim with the pack and I'd be good. To my surprise I actually felt good in the water. Nice even stroke, good body position and string kick....and the buoy was getting closer fast (well at least fast for me). I actually grinned in the water at the fact I was calm and swimming by other swimmers. So much so that I had the where with all to hit the lap button on my watch because I wanted to know how quickly I swam each length on the swim (7:11 out, 5:55 back. no speed record and yes there was a current but I'll happily take it). I got out of the water, caught me breath and headed into transition.

Like I said, I know this course really well and knew I had about 5 miles before the first turn so I wanted to get into to good rhythm and be around 23mph to start off the ride...and I was right there...until the first turn. That was where a group of motorcyclists (10of them to be exact) riding two abreast, freaked out and stopped at the turn..in the middle of the road because they couldn't figure out what was going on as the race official and cop were YELLING at them to go through the stop sign intersection to make room for cyclists coming up...and with nowhere to go I put the bike onto the shoulder and into the grass and had to dismount. Oh ya,, and the turn was on a hill...son of a monkey hammer. All I could do was run the bike up the hill, remount and try to get back on pace. My mind, my heart and my soul were filled with anger as I get back in the big ring and try to get up to speed...only to be relieved by my passing the SAME group of motorcyclists lollygag riding below the speed limit, two a breast, further down the course! Jumping-jesus-christ-on-a-pogo-stick! For real?!?! I took great pride, passing them at about 45mph on the downhill, in the lane marked out for us cyclists. My goal was to just keep the speed above 22mph for the rest of the way and then see how I felt out on the run. 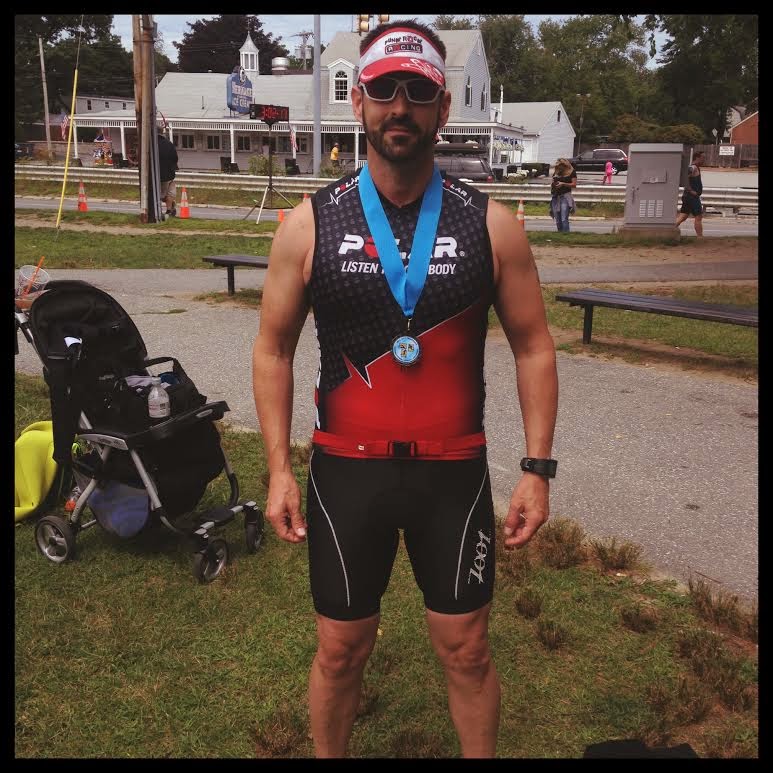 The run is a simple out and back and you can probably see at least a half mile in front of you so all I wanted to do was pick runners to catch...and run them down. I considered looking at my watch and checking my pace but why? Its only four miles, just run! Amazingly I kept thinking "save it for the turn" while "ain't nothing gonna break my stride" was stuck in my head. I literally laughed out loud. First off, save it for the turn? What was I gonna save? I was gassed already and its only four miles. Secondly, "ain't nothing gonna break my stride"? Ha! This race was. I was running wide open already and I knew I probably wasn't turning faster than a 7:30 pace at best. Time to quit thinking about time or pace and just catch the people ahead of you. Because its an out and back course, I could see the leaders and started counting as I headed to the turn. I thought I was in 12th or 13th and I was closing on one runner. Time to just empty the tank and go. I caught two runners and crossed the line in 1:24:38. Good enough for 11th overall and second in my AG. I'd love to say I went into the race with o expectations..but that would be a lie. Anytime I want to show up, I think I can podium. Yes, totally unrealistic I know...esepcially given the circumstances ove the last few weeks but I was very happy to end up on the podium. Amazingly, I was only a minute of my PR for the course. I'll take it!
Posted by Dutch at 11:20 PM No comments: