I'm not an athlete...I want to be one. Growing up, I was that skinny little dork kid who was in chorus, played piano, was in the band, read everything I could get my hands on and was in theater. Or as I like to call it, completely invisible to any of the cool kids and ALL of the girls.

My sophomore year of high school I found the football team and the weight room. I was taken aback at how I could see change, in the mirror as I got stronger...and as I got noticed. My parents bought me my first bike (a Giant RS940 which I held onto into my late 20's and I still regret selling) then too. Cycling offered up a whole new world to me. I didn't have to be dependent on anyone, it was just me and the bike. It was then that I fell in love with cycling. I joined a local cycling club and then got involved in the local racing scene. I showed promise as a young cyclist and had aspirations of becoming the next Bernard Hinault or Laurent Fignon (look 'em up and remember I am French after all) and later Greg Lemond but my parents thought an education and a "stable" job were more important life pursuits. Enter the Army and college. 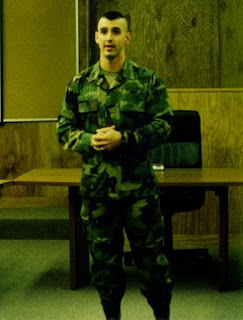 Being physically fit was a staple in being a successful Airborne Ranger Infantryman but to be honest it killed all my desire to race on weekends or for fun. My life was more about training specifically for the kind of torture a soldier's life brings than trying to get miles as a "runner". One of my roommates however was a long distance runner and of course talked me into going out on a few long runs with him which got me thinking about running long distances. But then my Battalion Commander threw out the "marathon challenge" to see who could ramp up their training to run the inaugural Atlanta Marathon. A challenge? Um, ya...I'm in. That first marathon was an experience and I dragged myself to a 4hr finish. That kind of lit the fire for wanting to run and sure there was a stretch in there where I jammed in a few marathons and triathlons but I never took it seriously or trained that way. Not to mention, due to my "have to be better than everybody" attitude led to a number of serious injuries and surgeries that always required my doing some type of rehab from injury so I never really got to enjoy running or cycling.

Due to a career ending injury (a misdiagnosed broken ankle, originally called a severe sprain, that I continued to train and run on for months until I killed the bone tissue) my time as a Soldier came to an abrupt end. Now, because of an active lifestyle and quick recovery time, I could (and did) eat anything I wanted. I LOVE food. My mom is a great French cook and my father (a dyed in the wool Georgia boy who could give Paula Dean a run for her money) introduced me to chocolate and butter. Which to be honest, is the staple to making any recipe better. However, the lengthy recovery from the ankle in addition to my continued eating like it was the Apocalypse, led to me throwing on the pounds. And...the additional pounds aggravated the pain I'd been suffering in my lower back for a couple years. It got so bad that I had difficulty getting out of bed on my own. That resulted in trips back the docs for x-rays, MRIs and analysis...which, led to my finding out that the pain I'd been feeling all this time was due an undiagnosed broken back and pelvis (L4, L5 and S1) that had healed incorrectly. Now, I have a lot of people tell me they have no idea how I could've dealt with that but let me tell you that, a: I have a high tolerance for pain and b: (and most importantly) there is no such thing as being pain free when your job is to be an Infantrymen. That job makes you do things to your body that it was never meant to do...and that results in pain...daily and often. But you're taught to "suck it up and drive on". I mean where else are you expected to throw yourself out of an airplane, strike the ground at roughly 22 feet per second, wearing in excess of 100 pounds of gear and then walk under that load for 6-10 miles, to THEN attack the enemy?

I got depressed. My level of activity was next to nothing, my personal life was going to crap and my job, post Army, wasn't particularly fulfilling. I turned to the one thing I did love, food...any and all of it...which led me to balloon up to 245 pounds with a 38 inch waist. My increased size made me feel terrible about myself. There is only one picture that shows me at my heaviest (I put it up here to prove I was that size) and that's because I had no idea it was being taken. I was so ashamed of myself that I would either step out of or completely refuse to be in photographs! To add insult to injury (or the reverse I guess), the extra weight made it even more difficult for me to get around. The docs were telling me that I should look into walking with a cane or consider getting my back fuzed. I had to get cortisone shots to help with the back pain. I couldn't believe where I'd ended up. I was the "I can do anything", "No Fear" guy and now I'm just another old fat guy!

That led me to some doing some research into my options and getting in touch with some great doctors which included my favorite that told me "well, if you weren't so fat, you're back wouldn't hurt so much. You could spend time in the gym strengthening your core and that would help support your spinal column. You're too young and if you fuze your spine now, you're likely to have to continue it over time." You know what? He was absolutely right and that was just the kind of kick in the butt I needed. Unfortunately I went about my weight loss all wrong with a routine of ephedrine, a restricted calorie diet and excessive amounts of working out. I shrank to 158 pounds. That weight, on my 5'10" frame made me look like gaunt. Ya, I was thin and relatively pain free but I was nowhere near healthy nor living a healthy life. And of course, led me to falling off the wagon and start putting weight back on again...swelling back up to 198 pounds. Sure, I was down from the 245 but I was still overweight and looked like crap...and the cycle started all over again.

So, I took a deep breath and focused on getting in shape the "right way". It just so happened that my best friend was getting into running and wanted my help in her training and then running a local 5k. I now had a goal on the wall and a training plan ensued. I think we trained for somewhere around a month leading up to the race and I have to admit, finishing that race, exhausted, drenched in sweat and salt and being ecstatic to finish under my goal time was one of the most fulfilling moments of my life. I had a time mark on the wall that I could build on. That same year I won entry to the Chicago Triathlon (I still need to share that story) through Polar, the best heart rate monitors on the planet and to which I owe so much (still need to share that story too) and I was hooked. That re-lit my competitive fire and I got into training and racing full bore. I now average 20 plus races a year (check out the race resume tab) and haven't looked back. I take great pride that people now refer to me as the "crazy, fit guy". By no means do I look like I want or race to the level I'd like (ya, there's  blog post coming for that too) but I can appreciate how far I've come and what I've accomplished. I have not arrived here easily however. The past 2 years of training and racing have been peppered with poor training decisions, injury and self doubt (I am REALLY great at the self doubt part) but I work at it everyday because I'm nowhere near figuring out the right formula for me. I fight my own demons about my weight, my build and my performance on a regular basis. But...at the end of the day its not about the failures, but the success and that's what you have to focus on to continue growing as an athlete and a person. 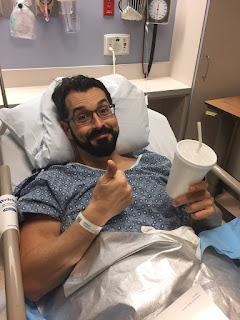 (New update December 2016) Well, it seems that this blog will be a place where I can talk about ONE MORE hurdle I have to get over in order to be the best "me" that I can be...reconstructive hip surgery. The crash at Timberman 70.3 a few years ago (you can read my race recap here) did more damage than we initially thought. Seems that on top of the cracked/bruised ribs, the ripped off end of my finger and the terrible road rash, the impact of hitting the ground on my left hip broke my femur, tore my labrum (from the femur being shoved into the hip socket) and cracked my pelvis. The pain during the race and during training/racing for the next couple of years wasn't from bad form, it was from that injury never being diagnosed and my constantly doing damage. So much so that I had bone scarring/malformations during the "healing" process that required a bone shaving/reshaping/resurfacing of the femoral head and stalk, the interior of my pelvis and then a labrum repair. The surgeon said the surgery and repair went well and the prognosis for recovery is good...but this means I will be literally starting from square one after the surgery, rehab and then having to wait 4 months in order to be cleared to run again.


I hope to make "Fueled by Iron" a place to talk honestly about my experiences with training, racing and trying out new gear en route to my ultimate goal of competing in an Ironman Triathlon.  I really do believe that a positive outlook and never say die attitude can lead you to be successful in any endeavor and I hope my journey and story here will help motivate others to get off the couch to not only become active but competitive too. There are 3 mantras that I use as constant motivation to get me through training, racing and life: "That which does not kill us, makes us stronger" (soon to be a tattoo on me), "Be smart enough to know you're stupid" you need to realize what you don't know and ask for help, "There's only two ways to finish a race: crossing the finish line or being carried out on stretcher" and "You can throw up when its over". Look, if I can drag my fat, broken, old self out to train and race...SO CAN YOU!